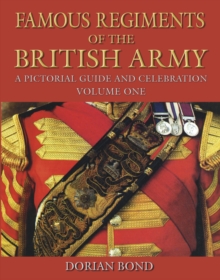 Famous regiments of the British Army : a pictorial guide and celebrationVolume 1

As the amalgamation of all the famous regiments of the British Army is completed, this book is a timely reminder of past glories.

Thirty five of the most famous regiments are featured - their battle honours, their badges, their most famous sons - and the stories of the actions of Victoria Cross holders.

Dorian Bond reveals the history of these unique bodies of men, how the Glorious Glosters - the Gloucestershire regiment - were once known as the Slashers, after a Montreal magistrate's ear was cut off in 1764.

Why does their badge today feature the Sphinx? Because of service in Egypt in 1801. Covering action wherever the regiments found it, from Flanders, Ireland, America, the West Indies, the Crimea, Burma and Korea, Famous Regiments of the British Army tells the tales of some of the most famous battles in history, from Ramillies to Talavera and Waterloo, and the role these regiments played.