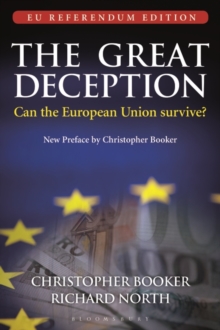 The great deception : can the European Union survive?

Now published with a new preface explaining why The Great Deception is of the utmost importance today as it was when it was first published and to coincide with Great Britain's EU referendum in 2016, this book suggests that the United States of Europe and its edict of 'ever closer union' have been based on a colossal confidence trick. The Great Deception tells for the first time the inside story of the most audacious political project of modern times: the plan to unite Europe under a single 'supranational' government.

From the 1920s, when the blueprint for the European Union was first conceived by a British civil servant, this meticulously documented account takes the story right up to the moves to give Europe a political constitution, already planned 60 years ago to be the 'crowning dream' of the whole project.

The book shows how the gradual assembling of a European government has amounted to a 'slow motion coup d'etat', based on a strategy of deliberate deception, into which Britain's leaders, Macmillan and Heath, were consciously drawn.

Drawing on a wealth of new evidence, scarcely an episode of the story does not emerge in startling new light, from the real reasons why de Gaulle kept Britain out in the 1960s to the fall of Mrs Thatcher.

The book chillingly shows how Britain's politicians, not least Tony Blair, were consistently outplayed in a game the rules of which they never understood.

But it ends by asking whether, from the euro to enlargement, the 'project' has now overreached itself, as a gamble doomed to fail. Since their collaboration began in 1992, Christopher Booker, a Sunday Telegraph columnist, and Richard North, who worked for four years in Brussels and Strasbourg as a senior researcher, have won a unique reputation for their expertise on Britain's relationship to the European Union.

Their previous publications included The Mad Officials (1994) and The Castle of Lies (1996).

But they regard The Great Deception as the book they had been waiting to write for ten years.