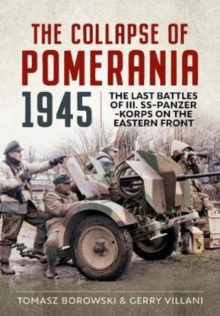 The Collapse of Pomerania 1945 : Last Battles of III Ss-Panzer-Korps on the Eastern Front

The Collapse of Pomerania brings the reader back to the front lines in Pomerania where the volunteers of the III SS Panzer Korps were fighting the last battles of the Reich before retreating into German territory.

Somehow these titanic battles have been forgotten, however the authors were able to bring their history to life in this book through correspondence and interviews with surviving Waffen SS veterans and extended research in local archives.

This unique document gives the reader the opportunity to learn about the motivation and the beliefs of these foreign Waffen SS volunteers by digging into their personal stories.

Displaying standards of courage, discipline, and self-sacrifice which commands the respect of any soldier or historian they fought their way to a combat reputation and fighting power second to none.

Their iron reliability led to their employment as a military fire brigade, rushed from sector to sector to shore up collapsing fronts just like they did in Pomerania.

With over 150 reenactor pictures prepared for this book, the authors try to give the reader a better understanding of the equipment, uniforms, and life at the front lines in Pomerania during the last months of the Second World War.