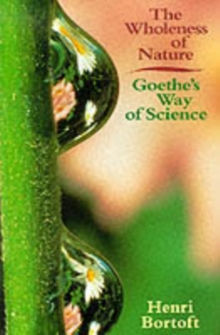 The wholeness of nature : Goethe's way of science

The scientific work of Johann Wolfgang von Goethe (1749-1832) represents a style of learning and understanding which is largely ignored today.

The approach of modern science is largely detached, intellectual and analytical, and it is increasingly recognized that many of our contemporary problems stem from the resulting divorce from nature.

By contrast, Goethe's way of science pursued understanding through the experience of the 'authentic wholeness' of what was observed.

Working with the intuitive mode of consciousness, Goethe aimed at an encounter with the whole phenomenon in its relationship with the observer.

In his way of seeing, rather than dividing merely in order to categorize, we should investigate the parts of an object in order to reveal the true nature of the whole.

In this invaluable study, Henri Bortoft examines the phenomenological and cultural roots of Goethe's ways of science.

He argues that Goethe's insights, far from belonging to the past, represent the foundation for a future science. This new science of nature, involving other human faculties besides the analytical mind, can provide understanding and explanation in a way which our present scientific attitudes, and the culture they serve, desperately lack.