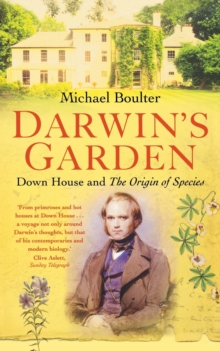 Darwin's garden : Down House and the origin of species

Five years after returning from his trip around the world on HMS Beagle, the young Charles Darwin became the owner of Down House in Kent, where he moved his growing family, far away from the turmoil and distractions of London.

He would live here for the rest of his life. It would become the place where he began work on his masterpiece On the Origin of Species. For almost twenty years he used the garden around him as his laboratory.

In the orchard he conducted experiments on pollination.

He built a dovecot where he could breed new strains of pigeons that helped him understand the questions of generation.

On his daily walk along the sandbank he observed how plants competed for survival.

In his heated greenhouse he conducted experiments on orchids and primulas.

In solitude he was also able to struggle with the ideas of evolution that had haunted him since his voyage, and give him the courage to publish his revolutionary new ideas.

Bringing Darwin's garden to the present day, Boulter unfolds a shining portrait of the formation of one of England's greatest thinkers and his relationship with the place he loved and shows how his experiments that he conducted over 150 years ago are still revealing new proofs and revelations as we continue to search for the origins of life.