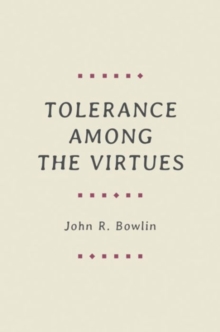 Tolerance among the virtues

In a pluralistic society such as ours, tolerance is a virtue--but it doesn't always seem so.

Some suspect that it entangles us in unacceptable moral compromises and inequalities of power, while others dismiss it as mere political correctness or doubt that it can safeguard the moral and political relationships we value.

Tolerance among the Virtues provides a vigorous defense of tolerance against its many critics and shows why the virtue of tolerance involves exercising judgment across a variety of different circumstances and relationships--not simply applying a prescribed set of rules. Drawing inspiration from St. Paul, Aquinas, and Wittgenstein, John Bowlin offers a nuanced inquiry into tolerance as a virtue.

He explains why the advocates and debunkers of toleration have reached an impasse, and he suggests a new way forward by distinguishing the virtue of tolerance from its false look-alikes, and from its sibling, forbearance.

Some acts of toleration are right and good, while others amount to indifference, complicity, or condescension.

Some persons are able to draw these distinctions well and to act in accord with their better judgment. When we praise them as tolerant, we are commending them as virtuous.

Bowlin explores what that commendation means. Tolerance among the Virtues offers invaluable insights into how to live amid differences we cannot endorse--beliefs we consider false, actions we think are unjust, institutional arrangements we consider cruel or corrupt, and persons who embody what we oppose.