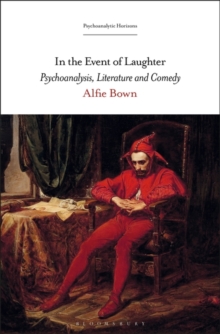 In the event of laughter : psychoanalysis, literature and comedy

Part of the Psychoanalytic Horizons series

Using Lacanian psychoanalysis, as well as its pre-history and afterlives, In the Event of Laughter argues for a new framework for discussing laughter.

Responding to a tradition of 'comedy studies' that has been interested only in the causes of laughter (in why we laugh), it proposes a different relationship between laughter and causality.

Ultimately it argues that laughter is both cause and effect, troubling chronological time and asking for a more nuanced way of conceiving the relationship between subjects and their laughter than existing theories have accounted for.

Making this visible via psychoanalytic ideas of retroactivity, Alfie Bown explores how laughter - far from being a mere response to a stimulus - changes the relationship between the present, the past and the future.

Bown investigates this hypothesis in relation to a range of comic texts from the 'history of laughter,' discussing Chaucer, Shakespeare, Kafka and Chaplin, as well as lesser-known but vital figures from the comic genre.