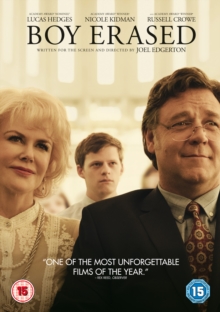 Joel Edgerton directs, writes and stars in this biographical drama based on the memoir of Garrard Conley, who was made to attend gay conversion therapy by his strictly religious family.

When Jared (Lucas Hedges) is outed to his own parents by a vicious college student, he reluctantly admits that he is attracted to men after breaking up with his girlfriend.

Horrified by the prospect of having a gay son, Baptist preacher Marshall (Russell Crowe) forces Jared to attend a gay conversion programme or else face being ostracised by his family.

Enduring the torment of gruelling psychological treatment and witnessing the abuse of his peers, Jared stands up to the bullying behaviour of programme leader Victor (Edgerton) with the support of his mother, Nancy (Nicole Kidman), who becomes horrified at the treatment of her son.

Marshall, however, continues to struggle with his son's identity which begins to tear the family apart.