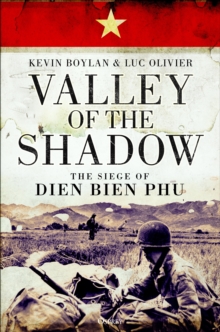 Valley of the shadow : the siege of Dien Bien Phu

Following the end of World War II, France attempted to reassert control over its colonies in Indochina.

In Vietnam, this was resisted by the Viet Minh leading to the First Indochina War.

By 1954, the French army was on the defensive and determined to force the Viet Minh into a decisive set-piece battle at Dien Bien Phu. Over the past five decades, Western authors have generally followed a standard narrative of the siege of Dien Bien Phu, depicting the Viet Minh besiegers as a faceless horde which overwhelmed the intrepid garrison by sheer weight of numbers, superior firepower, and logistics.

However, a wealth of new Vietnamese-language sources tell a very different story, revealing for the first time the true Viet Minh order of battle and the details of the severe logistical constraints within which the besiegers had to operate.

Using these sources, complemented by interviews with French veterans and research in the French Army and French Foreign Legion archives, this book, now publishing in paperback, provides a new telling of the climactic battle in the Indochina War, the conflict that set the stage for the Vietnam War a decade later.