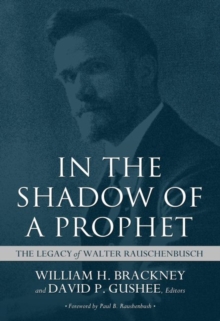 In the Shadow of a Prophet : The Legacy of Walter Rauschenbusch

Walter Rauschenbusch's thought made an indelible and enduring impact on the Christian world and beyond.

His writings made an immediate impact upon publication, and have been reprinted over the years since by many different disciples.

A roster of distinguished and younger scholars plumbed the depths of Rauschenbusch's impact on the Christian Tradition.

A second group of papers is devoted to the extent of the Rauschenbusch legacy and includes writers Andrea Strubind (the German context), Adam Bond (Samuel D.

Proctor as a disciple of the Black Social Gospel), Roger Prentice (the Canadian Context), and Chakravarthy Zadda (the Telugu mission context in India).

A third cluster features specific aspects of the Rauschenbusch legacy: Wendy Deichmann (gender and the family); Darryl Trimiew (the Black Church); Dominik Gautier (postcolonial reflection by a European); and Christina Littlefield (Rauschenbusch as a Muckraker).

Of particular interest is the personal reflection by Paul B.