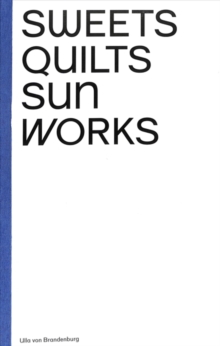 Published on the occassion of concurrent exhibitions held in London and Bonn featuring recent work by Franco-German artist Ulla von Brandenburg, and including the new Whitechapel Gallery commission for 2018/19. This lavishly illustrated catalogue comprehensively documents three recent projects by von Brandenburg which will be exhibited between Whitechapel Gallery and Kunstmuseum, Bonn: It Has a Golden Sun (2016), Quilts (2017) and Sweet Feast (2018). As a brand new commission by Whitechapel Gallery for 2018-19, Sweet Feast is notable for its engagement with the Gallery and its archive through a major new film and sculptural installation.

The work takes previous Whitechapel Gallery exhibition `Sweets' (1973) as its inspiration, an event which marked Britain's entry into the European Common Market and featured confectionery from nine countries of the enlarged EU community.

At the close of the show, children were invited to sample a selection of sweets.

In their enthusiasm, they devoured the exhibition. Von Brandenburg will film a re-enactment of this unexpected feast with the participation of 100 children from a local primary school, initiating timely conversations with the children about our current changing relationship with the European Union and shared food culture issues and histories.

The artist is also making a new immersive and colourful seating structure, which playfully aligns the audience with the film's protagonists.