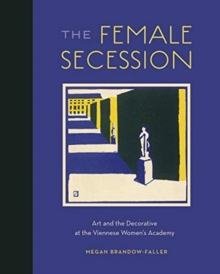 The Female Secession : Art and the Decorative at the Viennese Women's Academy

However, the artists connected with interwar Vienna's "female Secession" created craft-based artworks that may be understood as sites of feminist resistance.

In this book, historian Megan Brandow-Faller tells the story of how these artists disrupted long-established boundaries by working to dislodge fixed oppositions between "art" and "craft," "decorative" and "profound," and "masculine" and "feminine" in art. Tracing the history of the women's art movement in Secessionist Vienna-from its origins in 1897, at the Women's Academy, to the Association of Austrian Women Artists and its radical offshoot, the Wiener Frauenkunst-Brandow-Faller tells the compelling story of a movement that reclaimed the stereotypes attached to the idea of Frauenkunst, or women's art.

She shows how generational struggles and diverging artistic philosophies of art, craft, and design drove the conservative and radical wings of Austria's women's art movement apart and explores the ways female artists and craftswomen reinterpreted and extended the Klimt Group's ideas in the interwar years.

Brandow-Faller draws a direct connection to the themes that impelled the better-known explosion of feminist art in 1970s America.

In this provocative story of a Viennese modernism that never disavowed its ornamental, decorative roots, she gives careful attention to key primary sources, including photographs and reviews of early twentieth-century exhibitions and archival records of school curricula and personnel. Engagingly written and featuring more than eighty representative illustrations, The Female Secession recaptures the radical potential of what Fanny Harlfinger-Zakucka referred to as "works from women's hands." It will appeal to art historians working in the decorative arts and modernism as well as historians of Secession-era Vienna and gender history.