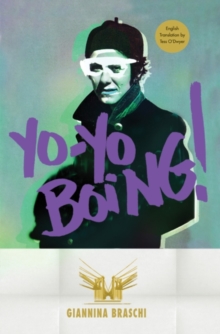 By: Braschi, Giannina,  O'Dwyer, Tess(Translated by)

This groundbreaking novel, set in New York City during the 1990s, is guaranteed to be unlike any literary experience you have ever had.

Acclaimed Puerto Rican author Giannini Braschi has crafted this creative and insightful examination of the Hispanic-American experience, taking on the voices of a variety of characters - painters, poets, sculptors, singers, writers, filmmakers, actors, directors, set designers, editors, and philosophers - to draw on their various cultural, economic, and geopolitical backgrounds to engage in lively cultural dialogue.

Braschi's discourse winds throughout the city's public, corporate, and domestic settings, offering an inside look at the cultural conflicts that can occur when Anglo Americans and Latin Americans live, work, and play together.

Hailed by Publishers Weekly as "a literary liberation," this energetic and comical novel celebrates the contradiction that makes contemporary American culture so wonderfully diverse.

Praise for Yo-Yo Boing!: â€œKnown for their radical linguistic and structural inventions, as well as for their overt political thrustâ€¦Giannina Braschiâ€™s postmodern poetry collection Empire of Dreams and her ground-breaking bilingual novel Yo-Yo Boing! are an â€œin-your-face assertionâ€ of the vitality of Latino culture in the US.â€ - The New York Daily Newsâ€œThe novel, evoking the name of the islandâ€™s famous comedian Yo-Yo Boing!, is neither fully written in English or Spanish, but rather sashays between the two languages much the way Puerto Rico itself sashays between two cultures, two identities, and two languages.â€ - The San Juan Starâ€œBraschiâ€™s novel is...a literary liberation.