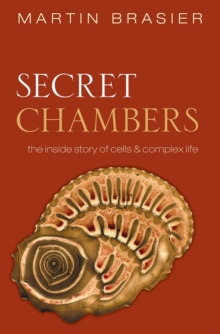 Secret chambers : the inside story of cells and complex life

By: Brasier, Martin (Professor of Palaeobiology, University of Oxford)

In the follow up to Darwin's Lost World, Martin Brasier introduces the quest for the missing history of life and the cell.

Through a series of journeys it emerges that the modern plant cell is one of the most deeply puzzling and unlikely steps in the whole history of life.

Decoding this puzzle is a great adventure that has mainly taken place over the last half century.

Brasier puts the big questions into context through lively descriptions of his explorations around the world, from the Caribbean Sea and the Egyptian pyramids, to the shores of the great lakes in Canada, and to the reefs and deserts of Australia.

Covering the period from 1 to 2 billion years ago - a period he once dubbed 'the boring billion' - he demonstrates how it in fact involved great evolutionary potential with the formation of the complex (eukaryotic) cell.

Without this cell there would be nothing on Earth today except bacteria, and the formation of this cell was a fundamental turning point in the history of life on Earth.

Weaving together several threads, Brasier emphasizes the importance of single-celled forms to marine ecosystems; symbiosis and coral reefs; and the architecture and beauty of single-celled Foraminifera and what they tell us about evolution.

From a master storyteller comes a vivid description of the earliest biological forms and a set of fascinating tales of travels and research.