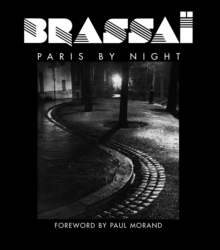 Published for the first time in 1933 and originally designed by Brassai himself, this is a high-quality reproduction of his legendary first book of photographs.

The city of Paris bewitched Brassai. Working as a journalist by day, by night he roamed the streets of the capital and visited its bistros, sharing moments in the lives of the prostitutes and peddlers, down-and-outs, and illicit lovers who lived on the margins of society.

Their nocturnal surroundings fascinated the artist, whose photographs are as much an exploration of the technical challenge of portraying darkness as portraits of a hauntingly dramatic night world. "Paris by Night", first published in 1933, features sixty-two of these poetic images, and has become an acknowledged classic of urban photography.

Brassai moved in the same circles as the surrealists he met Picasso in 1932, and worked on Le Minotaure, the famous surrealist review.

He retained a very individual creative vision, however, commenting: the surreal effect of my pictures was nothing more than reality made fantastic through a particular vision.

All I wanted to express was reality, for nothing is more surreal. This uniquely modern perspective has inspired a new generation of art critics and historians, and the centenary of Brassais birth was the catalyst for major retrospective exhibitions at the Pompidou Centre in Paris, the Houston Museum of Fine Arts, the National Gallery in Washington, and the Hayward Gallery in London.

The current reissue of "Paris by Night" brings one of the last century's key photographic works back into print.