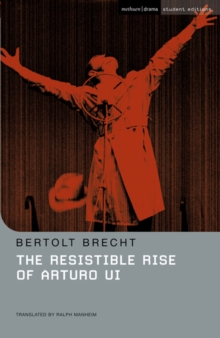 The resistible rise of Arturo Ui

Methuen Drama
0713685115 / 9780713685114
Paperback
832.912
01/03/2007
3 in stock Need More ?
United Kingdom
English
20 cm lxxvii, 111 p.
general  Learn More
Reprint. Previous ed. of this translation: 2002.
A set text for AQA GCE Drama The 50th anniversary of Brecht's death in 2006 with some major new productions of his work in this country: Life of Galileo at the National Theatre, Mother Courage toured by English Touring Theatre Brecht is one of the great twentieth century playwrights, directors and poets who has had an enormous influence on theatre Strong sales to schools and colleges where this and other works by Brecht are set texts This student edition includes a full commentary, plot summary, notes, bibliography, chronology of the writer's life and work and questions for study
Black Friday - Up to 50% Discount

This is an annotated student edition of one of Brecht's most famous plays and a classic of modern literature/theatre.

Described by Brecht as "a gangster play that would recall certain events familiar to us all", "Arturo Ui" is a witty and savage satire of the rise of Hitler - recast by Brecht into a small-time Chicago gangster's takeover of the city's greengrocery trade.

Using a wide range of parody and pastiche - from Al Capone to Shakespeare's "Richard III" and Goethe's "Faust" - Brecht's compelling parable continues to have relevance wherever totalitarianism appears today.

Written during the Second World War in 1941, the play was one of the Berliner Ensemble's most outstanding box-office successes in 1959, and has continued to attract a succession of major actors, including Leonard Rossiter, Christopher Plummer, Antony Sher and Al Pacino. "One of the greatest poets and dramatists of our century" - "Observer".