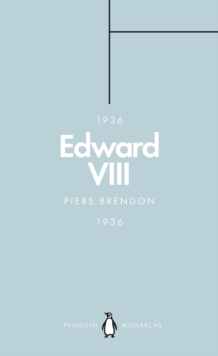 Part of the Penguin Monarchs series

'After my death,' George V said of his eldest son and heir, 'the boy will ruin himself within twelve months.'The forecast proved uncannily accurate.

Edward VIII came to the throne in January 1936, provoked a constitutional crisis by his determination to marry the American divorc e Wallis Simpson, and abdicated in December.

He was never crowned king.In choosing the woman he loved over his royal birthright, Edward shook the monarchy to its foundations.

Given the new title 'Duke of Windsor' and essentially sent into exile, he remained a visible skeleton in the royal cupboard until his death in 1972 and he haunts the house of Windsor to this day.Drawing on unpublished material, notably correspondence with his most loyal (though much tried) supporter Winston Churchill, Piers Brendon's superb biography traces Edward's tumultuous public and private life from bright young prince to troubled sovereign, from wartime colonial governor to sad but glittering expatriate.

With pace and panache, it cuts through the myths that still surround this most controversial of modern British monarchs.