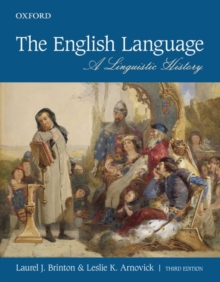 The English language : a linguistic history

The English Language: A Linguistic History surveys the development of the English language from its Indo-European past to the present day.

It covers the entire history of the English language beginning with its prehistoric origins in Proto-Indo-European and includes thorough coverage of its four major periods: Old English, Middle English, Early Modern English, and Modern English. The third edition features enhanced discussion of the socio-historical and cultural contexts of the English language in the new "Language in Context" features in each chapter.

Discussion of new approaches to the history of English, such as historical pragmatics and historical sociolinguistics,have been added or expanded along with new debates, such as the current work on the Proto-Indo-Europeans or the status of English as a global language or second language.

A new appendix includes an anthology of specimen texts from the four major periods of English, chosen for their use of colloquialand non-literary language.