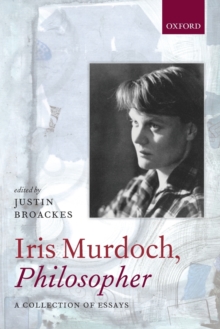 She made her name first for her challenges to Gilbert Ryle and behaviourism, and later for her book on Sartre (1953), but she had the greatest impact with her work in moral philosophy-and especially her book The Sovereignty of Good (1970).

She turned expectantly from British linguistic philosophy to continental existentialism, butwas dissatisfied there too; she devised a philosophy and a style of philosophy that were distinctively her own.

Murdoch aimed to draw out the implications, for metaphysics and the conception of the world, of rejecting the standard dichotomy of language into the 'descriptive' and the 'emotive'.

She aimed, inWittgensteinian spirit, to describe the phenomena of moral thinking more accurately than the 'linguistic behaviourists' like R.

M. Hare. This 'empiricist' task could be acheived, Murdoch thought, only with help from the idealist tradition of Kant, Hegel, and Bradley. And she combined with this a moral psychology, or theory of motivation, that went back to Plato, but was influenced by Freud and Simone Weil.

Murdoch's impact can be seen in the moral philosophy of John McDowell and, in differentways, in Richard Rorty and Charles Taylor, as well as in the recent movements under the headings of moral realism, particularism, moral perception, and virtue theory.

This volume brings together essays by critics and admirers of Murdoch's work, and includes a longer Introduction on Murdoch's career, reception, and achievement.

It also contains a previously unpublished chapter from the book on Heidegger that Murdoch had been working on shortly before her death, and a Memoir by her husband John Bayley.

It gives not only an introduction to Murdoch's important philosophical life and work, but also a picture of British philosophy in one of its heydays and at animportant moment of transition.