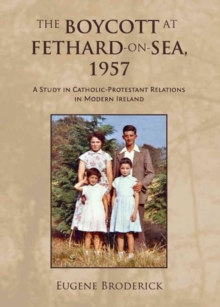 The boycott at Fethard-on-Sea, 1957 : a study in Catholic-Protestant relations in modern Ireland

This book examines the boycott of the Protestant community of Fethard-on-Sea, County Wexford, Ireland, by local Catholics because of a dispute over a mixed marriage.

Sheila Cloney, a member of the Church of Ireland, refused to have her two children educated in the local Catholic National School, in accordance with promises she had made before she married her Catholic husband, Sean Cloney.

Rather than submit to pressure being put on her by the local Catholic clergy, she took her children to Belfast and then to Scotland.

The boycott began in May 1957 and lasted until September of the same year.

The drama, which combined personal, religious and political elements, was to be played out in the law courts of Belfast, the pulpits of the land, in the Dail and Senate, but especially in the boycotted shops and Protestant school of Fethard.

The incident attracted a great deal of attention in Northern Ireland, and was furiously debated in the Stormont Parliament and on the Orange fields of the Twelfth.

The great figures of the 1950s in Church and State became involved, as a local incident attracted attention at home and abroad.

This book recounts the events of the Fethard boycott, situating them in the broader context of Catholic-Protestant relations since the foundation of the state.

This is more than a dramatic, human tale - this story highlights how the independent Irish state treated a religious minority and how that minority responded to the crisis.