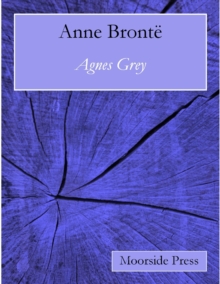 Published in December 1847 under the pseudonym Acton Bell, Agnes Grey was the first of two novels by Anne Bronte.

It details the experiences of the eponymous character, the daughter of a minister employed as a governess, and moving between rich houses of the Bloomfields and the Murrays.

The novel is in most respects autobiographical, drawn from Anne's own experiences employed as a governess at the Robinson household for five years with the only real fictional aspect being the resolution through a love interest.

Agnes Grey has been variously described as a masterwork of prose narration and, in comparison to the work of Anne's sisters, something necessarily mundane.

It certainly hasn't got the editorial panache of the other Bronts and can come across as flat and austere, but then the character of Agnes Grey herself implies a kind of puritan rigor that perhaps goes with the position of governess.