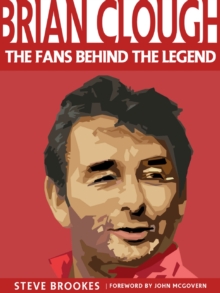 Brian Clough : the fans behind the legend

By: Brookes, Steve,  McGovern, John(Foreword by)

By turning two medium size clubs in the east Midlands into football powerhouses he deserves his place in football history.

Yet he was so much more than that... Clough's character and interaction with the people of the area, many of whom were not football fans, is almost unique. Whether it was helping old ladies with their shopping or giving them a lift home in his car or allowing young fans in to see their idols, Cloughie always seemed to have time for those around him without the condescension of it being a PR stunt or a way to win affection from the local populace.

Many of the stories in "The Fans Behind The Legend" speak of Brian's generosity and humility.

His TV persona as an opinionated loudmouth may have antagonised some, indeed in the opinion of many it cost him the England job, but his down to earth interactions with often awestruck fans is commonplace.

In this heart-warming appreciation of Brian Clough, he comes across as a man of the people, someone who is still very much missed and revered particularly in Derby and Nottingham and a man who continues to influence many of those who came into contact with him decades ago. Steve Brookes is a life-long Aston Villa fan but has always been aware of the high esteem with which Brian Clough has been held.

In writing the book he says: "this book has been a fascinating project, speaking to so many Derby County and Nottingham Forest fans and a lot of neutral football supporters and even people with no interest in sport who shared the same admiration and respect for Brian Clough.