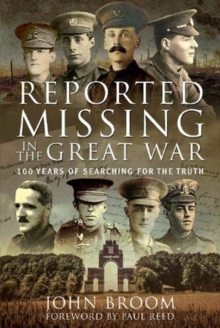 Reported missing in the Great War

Of the one million British and Empire military personnel who were killed in action, died of wounds, disease or injury or were missing presumed dead during the First World War, over half a million have no known grave.

Of these, nearly 188,000 are buried anonymously in Commonwealth War Graves Commission cemeteries, with a stone bearing the epitaph 'Known Unto God'.

The remains of a further 339,000 lie scattered across the wartime battlefields, having been buried in marked graves that were subsequently obliterated as front lines moved backwards and forwards, or destroyed forever in the carnage mechanised warfare wrought upon the human body. For the families of those who were reported missing, months of agonising uncertainty could await, as searches were made to establish the precise fate of their loved ones.

Sometimes rumours that an individual was recovering from wounds in a hospital, unable to contact his family, or had been taken prisoner by the enemy could circulate, causing a toxic admixture of hope, tinged with anxiety then dashed by the despair of the confirmation of death. This book traces the history of the searching services that were established to assist families in eliciting definitive news of their missing loved ones.

Then, using previously unpublished material, most of it lovingly preserved in family archives for over a century, the lives of eight soldiers, whose families had no known resting place to visit after the conclusion of the war, are recounted.

These young men, their lives full of promise, vanished from the face of the earth.

The circumstances of their deaths and the painstaking efforts undertaken, both by family members and public and voluntary organisations, to piece together what information could be found are described.

The eventual acceptance of the reality of death and the need to properly commemorate the lives of those who would have no marked grave are examined.

For three of the eight men, recent discoveries have meant that over a century since they were given up as missing, their remains have been identified and allowed families some degree of closure.