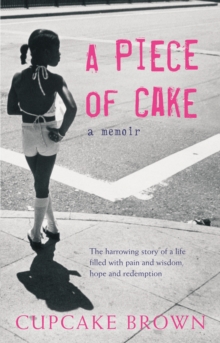 A piece of cake : a memoir

This is the heart-wrenching true story of a girl named Cupcake and it begins when, aged eleven, she is orphaned and placed in the 'care' of sadistic foster parents.

But there comes a point in her preteen years - maybe it's the night she first tries to run away and is exposed to drugs, alcohol, and sex all at once - when Cupcake's story shifts from a tear-jerking tragedy to a dark, deeply disturbing journey through hell.

Cupcake learned to survive by turning tricks, downing hard liquor and ingesting every drug she could find while hitchhiking up and down the California coast.

At just sixteen, she stumbled into the terrifying world of the gangsta, dealing drugs, hustling and only just surviving a drive-by shooting.

But, ironically, it was Cupcake's rapid descent into the nightmare of crack cocaine addiction that finally saved her.

After one four-day crack binge she woke up behind a dumpster.

Half-dressed and half-dead, she finally realized she had to change her life or die on the streets - another trash-can addict, another sad statistic.

Astonishingly, Cupcake turned her life around and this is her brutally frank, startlingly funny story. Unlike any memoir you will ever read, "A Piece of Cake" is a redemptive, gripping tale of a resilient spirit who took on the worst of contemporary urban life and survived it.

It is also the most genuinely affecting rollercoaster ride through hell and back that you will ever take.