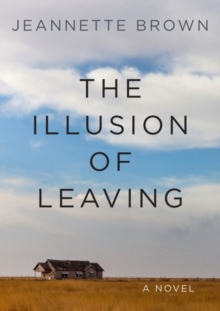 The illusion of leaving : a novel

Jamie Wright hates her West Texas hometown of Silver Falls, its small-minded people, the reminder of her childhood there and her failed first marriage - the source of her daddy's eternal disappointment.

Jamie's in town to plan his funeral, sell the ranch, and never look back.The funeral goes as planned, however, the reading of the will does not go as planned.

The night after the funeral, Jamie and two former classmates go for a nostalgic ride to reminisce about high school.

When a tornado system blows in, they drive to a nearby storm shelter.

There, fueled by vodka, the secrets erupt. The tornado razes part of Silver Falls as well as the ranch.

Jamie realizes that she is not immune to the pull of the land, the way its vast barrenness manages to sustain flora and fauna.

In the process of helping clean up the tornado damage to Silver Falls, Jamie finally becomes part of the community.