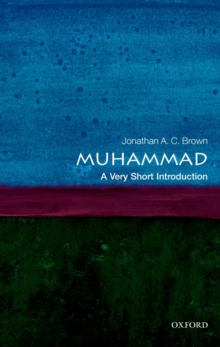 By: Brown, Jonathan A.C. (Assistant Professor of Arabic and Islamic Studies, Department of Near Eastern Languages and Civilization, University of Washington, Seattle)

As the founder of Islam Muhammad is one of the most influential figures in history.

The furor surrounding the Satanic Verses and the Danish cartoon crisis reminded the world of the tremendous importance of the prophet of Islam, Muhammad. Learning about his life and understanding its importance, however, has always proven difficult. Our knowledge of Muhammad comes from the biography of him written by his followers, but Western historians have questioned thereliability of this story in their quest to uncover the 'historical Muhammad'. As modern controversies have shown, whatever the truth about Muhammad's life, his persona has taken on numerous shapes and played a crucial role in Muslim life and civilization.

This Very Short Introduction provides an introduction to the major aspects of Muhammad's life and its importance, providing both the Muslim and Western historical perspectives. It also explains the prominent roles that Muhammad's persona has played in the Islamic world, from the medieval to the modern period. ABOUT THE SERIES: The Very Short Introductions series from Oxford University Press contains hundreds of titles in almost every subject area.