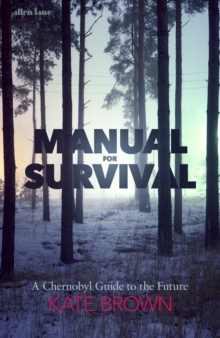 Manual for survival : a Chernobyl guide to the future

'Remarkable . . . grips with the force of a thriller' Robert MacFarlaneAn astonishing expose of the aftermath of Chernobyl - and the plot to cover up the truthThe official death toll of the 1986 Chernobyl accident, 'the worst nuclear disaster in history', is only 54, and stories today commonly suggest that nature is thriving there.

Yet award-winning historian Kate Brown uncovers a much more disturbing story, one in which radioactive isotopes caused hundreds of thousands of casualties, and the magnitude of this human and ecological catastrophe has been actively suppressed. Based on a decade of archival and on-the-ground research, Manual for Survival is a gripping account of the consequences of nuclear radiation in the wake of Chernobyl - and the plot to cover it up.

As Brown discovers, Soviet scientists, bureaucrats, and civilians documented staggering increases in cases of birth defects, child mortality, cancers and a multitude of life-altering diseases years after the disaster. Worried that this evidence would blow the lid on the effects of massive radiation release from weapons-testing during the Cold War, scientists and diplomats from international organizations, including the UN, tried to bury or discredit it.

Yet Brown also encounters many everyday heroes, often women, who fought to bring attention to the ballooning health catastrophe, and adapt to life in a post-nuclear landscape, where dangerously radioactive radioactive berries, distorted trees and birth defects still persist today. An astonishing historical detective story, Manual for Survival makes clear the irreversible impact of nuclear energy on every living thing, not just from Chernobyl, but from eight decades of radiaoactive fallout from weapons development.