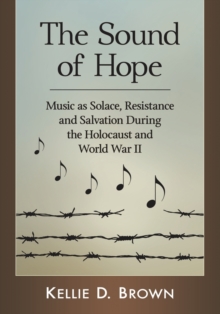 The Sound of Hope : Music as Solace, Resistance and Salvation During the Holocaust and World War II

Since ancient times, music has demonstrated the incomparable ability to touch and resonate with the human spirit as a tool for communication, emotional expression, and as a medium of cultural identity.

During World War II, Nazi leadership recognized the power of music and chose to harness it with malevolence, using its power to push their own agenda and systematically stripping it away from the Jewish people and other populations they sought to disempower.

But music also emerged as a counterpoint to this hate, withstanding Nazi attempts to exploit or silence it.

Artistic expression triumphed under oppressive regimes elsewhere as well, including the horrific siege of Leningrad and in Japanese internment camps in the Pacific.

The oppressed stubbornly clung to music, wherever and however they could, to preserve their culture, to uplift the human spirit and to triumph over oppression, even amid incredible tragedy and suffering. This volume draws together the musical connections and individual stories from this tragic time through scholarly literature, diaries, letters, memoirs, compositions, and art pieces.

Collectively, they bear witness to the power of music and offer a reminder to humanity of the imperative each faces to not only remember, but to prevent such a cataclysm.