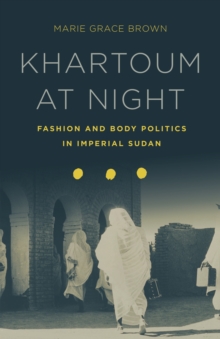 Khartoum at night : fashion and body politics in imperial Sudan

In the first half of the twentieth century, a pioneering generation of young women exited their homes and entered public space, marking a new era for women's civic participation in northern Sudan.

A provocative new public presence, women's civic engagement was at its core a bodily experience.

Amid the socio-political upheavals of imperial rule, female students, medical workers, and activists used a careful choreography of body movements and fashion to adapt to imperial mores, claim opportunities for political agency, and shape a new standard of modern, mobile womanhood. Khartoum at Night is the first English-language history of these women's lives, examining how their experiences of the British Empire from 1900-1956 were expressed on and through their bodies.

Central to this story is the tobe: a popular, modest form of dress that wrapped around a woman's head and body.

Marie Grace Brown shows how northern Sudanese women manipulated the tucks, folds, and social messages of the tobe to deftly negotiate the competing pulls of modernization and cultural authenticity that defined much of the imperial experience.

Her analysis weaves together the threads of women's education and activism, medical midwifery, urban life, consumption, and new behaviors of dress and beauty to reconstruct the worlds of politics and pleasure in which early-twentieth-century Sudanese women lived.