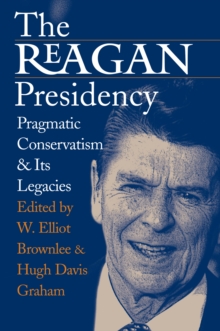 The Reagan presidency : pragmatic conservatism and its legacies

Some call him the "great communicator" and many even credit him with ending the Cold War.

Others even consider him the greatest president since Roosevelt.

Ronald Reagan claimed several distinctions as 40th president, but he will be most remembered by admirers and critics alike for his lasting conservative legacy.

This comprehensive and archivally grounded assessment of the Reagan presidency offers balanced "second generation" evaluations of the ideas and policies that made up the so-called "Reagan revolution".

Drawing on previously unavailable records, 17 scholars from history, political science and economics focus on important areas of national policy during the Reagan administration.

In tackling this legacy, these contributors do not necessarily agree on what it is and while there is consensus regarding Reagan's ideas, personality and leadership, there is both doubt and debate about actual achievements. In chapters covering such topics as national security, taxation, environmental policy, immigration reform, and federal judgeships, the authors tend to see his accomplishments as less dramatic than "first generation" proponents have maintained - that there was actually no "Reagan revolution".

Nevertheless, they also agree that his administration accomplished much of its mission in foreign policy and domestic economic policy - success attributed to his conservative idealism and pragmatic politics - and had a lasting effect on the transformation of American conservatism.

While less successful in advancing the social agenda of the "New Right", Reagan nevertheless shaped politics and policy in ways that extended beyond the years of his administration.

Whether or not Reagan changed America and the world as much as Roosevelt did remains in dispute, but this volume aims to advance our understanding of his presidency and allow us to better assess its accomplishments and legacy.