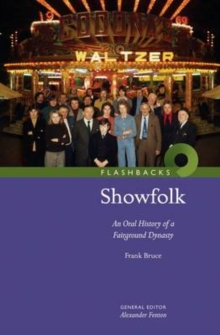 Showfolk : an oral history of a fairground dynasty

Part of the FLASHBACKS series

Travelling showfolk have been entertaining Scots for centuries and a visit to 'the shows' was a highlight of the year until recent memory.

The Codonas are one of the longest and most established show families, having arrived from the continent in the late eighteenth century.

The book is based almost entirely on original research and draws on interviews with three generations to give a vivid and richly anecdotal account of this ever-changing world.

The interviews have been kept intact as much as possible, to keep the flow of overlapping individual life stories but are organised chronologically from the 1890s, when it enters living memory, up to the present.

The hundred years from 1790 are described in a lively introduction including many first-hand accounts and following the family fortunes in the United Kingdom, the United States where members reached the top of the circus profession and as far afield as Hawaii.