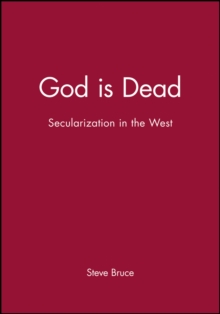 God is dead : secularization in the West

Part of the Religion and Spirituality in the Modern World series

Christianity in the democracies of the 'first' world has been declining in power, popularity and prestige for a century.

However, many commentators, social scientists as well as church leaders, try and minimize the extent of this change.

They maintain that religious sentiment remains strong despite declining levels of church involvement, and insist that secularization is an academic myth.

In this robust defense of the secularization paradigm, Bruce elaborates just what Weber, Durkheim, Berger and Wilson thought was happening to religion in the West, and responds to critics of this concept.

Specific topics covered include the significance of New Age spirituality, the influence of eastern religions on the West, the impact of science, the charismatic movement, religion and politics in the USA, and the future of religion.

Bruce concludes the old orthodoxy was right: cultural diversity, in egalitarian and liberal democracies that place the individual above the community, undermines religious belief.

Drawing on a diverse range of international examples, and written by one of the foremost sociologists of religion working today, God is Dead moves the debate about secularization forward. It will be an invaluable resource for students of sociology of religion, modern religion, Christianity, new religious movements and religion and culture.