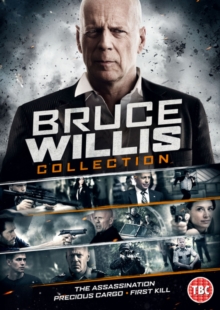 In 'The Assassination' (2008) aspiring reporter Bobby Funke (Reece Thompson) writes for the St Donovan's school newspaper but has yet to create anything worth publishing.

Tasked with leading the investigation into some missing SATs for Principal Kirkpatrick (Willis), Funke soon unravels a conspiracy running throughout the school which links the school president with the stolen exam papers, in doing so attracting the attention of Francesca (Mischa Barton), the most popular girl in school.

In 'Precious Cargo' (2016) master thief Jack (Mark-Paul Gosselaar) is coerced into carrying out an ambitious heist for dangerous crime boss Eddie (Willis) after his ex-girlfriend Karen (Claire Forlani) turns up pregnant and in need of a favour.

Jack unites his crew hoping to pull off the perfect job, save Karen's life and get a big payday but both the target and Eddie prove more dangerous than first feared...

Finally, in 'First Kill' (2017) high-flying Wall Street broker Will (Hayden Christensen) decides to take his family to his hometown for a bonding experience.

When Will decides to take his young son Danny (Ty Shelton) on a hunt however, Danny ends up being kidnapped.

Will needs the help of local sheriff Howell (Willis) to rescue him but Howell is sceptical of the situation and Will's part in it.