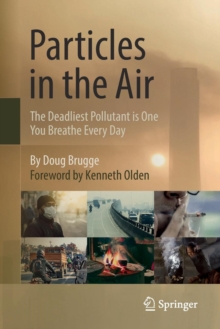 Particles in the Air : The Deadliest Pollutant is One You Breathe Every Day

These sources constitute three of the top ten public health problems in the world today and far outstrip any other environmental health threats in terms of health impact.

The book begins with indoor solid fuel combustion for cooking in lower income countries and tells the story of how this problem was identified and recent efforts to eliminate it.

The book next looks at tobacco smoking and second hand smoke, again reviewing the history of how these problems were identified scientifically and the fierce industry push back against the science.

This book is geared towards non-scientists, including high school and college students.