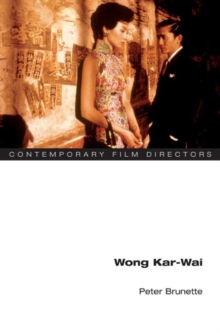 "Wong Kar-Wai" traces this immensely exciting director's perennial themes of time, love, and loss, and examines the political implications of his films, especially concerning the handover of former British colony Hong Kong to the People's Republic of China.

This book is the first, in any language, to cover all of Wong's work, from his first film, "As Tears Go By", to his most recent, the still unreleased "2046".

It also includes his best-known, highly honoured films, "Chungking Express", "Happy Together", and above all, "In the Mood for Love".

Most importantly, Peter Brunette describes the ways in which Wong's supremely visual films attempt to create a new form of cinema, by relying on stunning, suggestive visual images, and audio tracks to tell their story, rather than on traditional notions of character, dialogue, and plot.

The question of Wong Kar-wai's use of genre film techniques in art films is also explored in depth.

Peter Brunette is the Reynolds Professor of Film Studies at Wake Forest University.

He has written books on Roberto Rossellini and Michelangelo Antonioni, and is the co-author of "Screen/Play: Derrida and Film Theory".

He is chief critic for indieWIRE.com and reThis volume is part of the "Contemporary Film Directors" series, edited by James Naremore.