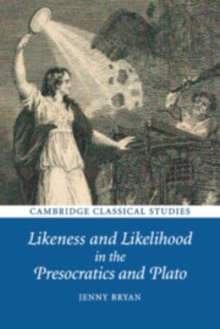 Likeness and likelihood in the Presocratics and Plato

The Greek word eoikos can be translated in various ways, being used to describe similarity, plausibility or even suitability.

This book explores the philosophical exploitation of its multiple meanings by three philosophers, Xenophanes, Parmenides and Plato.

It offers new interpretations of the way that each employs the term to describe the status of his philosophy, tracing the development of this philosophical use of eoikos from the fallibilism of Xenophanes through the deceptive cosmology of Parmenides to Plato's Timaeus.

The central premise of the book is that, in reflecting on the eoikos status of their accounts, Xenophanes, Parmenides and Plato are manipulating the contexts and connotations of the term as it has been used by their predecessors.

By focusing on this continuity in the development of the philosophical use of eoikos, the book serves to enhance our understanding of the epistemology and methodology of Xenophanes, Parmenides and Plato's Timaeus.