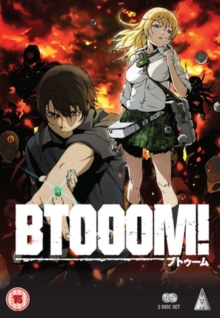 All 12 episodes from the Japanese anime adapted from Junya Inoue's manga which is set inside a video game.

Unemployed 20-something Ryota Sakamoto (voice of Kanata Hongo) loves to play the combat video game Btooom!, of which he is one of the best players in the world.

However, one day he wakes up on Btooom!'s strange island equipped with provisions and weapons, and to make it out alive he must destroy seven rivals before they take him out.

While there, he encounters his in-game wife Himiko (Suzuko Mimori) and they become determined to get back home together.