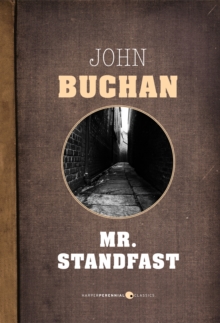 Recalled from duty on the Western Front by renowned spymaster Sir Walter Bullivant, British secret agent Richard Hannay goes undercover as a pacifist, working to outwit a dangerous German spy and his agents.

Guided by his contactand love interestMary Lamington, Hannay tracks his enemy from London to Glasgow to the Scottish Highlands, eventually confronting him in a dramatic climax above the battlefields of Europe.Revisiting the memorable characters from The Thirty-Nine Steps, Mr. Standfast is one of two Richard Hannay novels set during the First World War.

The Thirty-Nine Steps and its four sequels established John Buchan as an original thriller writer, and a pioneer of espionage fiction.HarperPerennialClassics brings great works of literature to life in digital format, upholding the highest standards in ebook production and celebrating reading in all its forms.