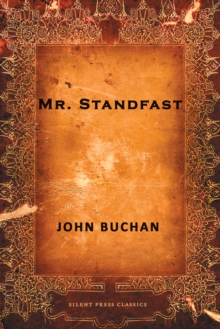 Richard Hannay, one of Britains top secret agents, has been called on once-more to disrupt a German plot to knock Britain out of the War.

Set near the end of the First World War, Mr. Standfast focuses on Hannays attempts to crack a web of German spies posing as pacifists in the heart of Britain.

In this book he is pitted against an old foe, the master of disguise Von Schwabing, and is introduced to the beautiful nurse, Mary Lamington, as he works to save his country for a third-time.

Ending in a climatic sequence that unfolds while a battle rages on the Western Front, Mr. Standfast is one of Buchans finest works and shows why he is regarded as an innovator of the espionage fiction genre.