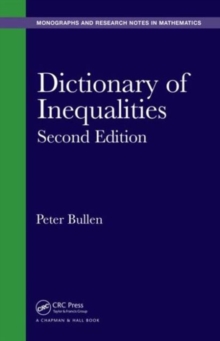 Adding new results that have appeared in the last 15 years, Dictionary of Inequalities, Second Edition provides an easy way for researchers to locate an inequality by name or subject.

This edition offers an up-to-date, alphabetical listing of each inequality with a short statement of the result, some comments, references to related inequalities, and sources of information on proofs and other details.

The book does not include proofs and uses basic mathematical terminology as much as possible, enabling readers to access a result or inequality effortlessly. New to the Second EditionMore than 100 new inequalities, including recently discovered onesUpdated inequalities according to the most recent researchInclusion of a name index Updated bibliography that contains URLs for important referencesThe book mainly presents the most common version of the inequality and later gives more general results as extensions or variants.

Inequalities that exist at various levels of generality are presented in the simplest form with the other forms as extensions or under a different heading.

The author also clarifies any non-standard notations and includes cross-references for transliterations.