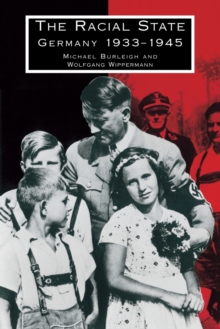 Between 1933 and 1945 the Nazi regime in Germany tried to restructure a 'class' society along racial lines.

This book deals with the ideas and institutions which underpinned this mission, and shows how Nazi policy affected various groups of people, both victims and beneficiaries.

The book, first published in 1991, begins with a serious discussion of the origins of Nazi racial ideology, and then demonstrates the thoroughness and purposiveness with which this was translated into official policy.

The book deals with the systematic persecution not only of the Jews, the largest group of victims of Nazism, but also with the fate of lesser-known groups such as Sinti and Roma, the mentally handicapped, the 'asocial', and homosexuals.

Finally, the book examines the racially-motivated social policies of the regime which affected every German 'national comrade'.

The authors argue that the Third Reich was fundamentally different from other totalitarian regimes because of the all-encompassing nature of its racial policies.

These were neither exclusively reactionary nor 'modern', but were rather an unprecedented form of progress into barbarism.