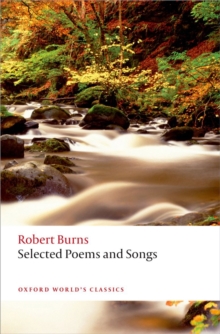 'The Poetic Genius of my Country...bade me sing the loves, the joys, the rural scenes and rural pleasures of my natal Soil, in my native tongue.' Many of the poems and songs of Robert Burns (1759-96) are familiar to readers the world over: lyrical, acerbic, comic, bawdy, democratic.

They include 'To a Mouse', 'John Anderson my Jo', 'A red red Rose', 'Auld lang syne', 'Tam o 'Shanter' and many more, whose vernacular energy and simple beauty have ensured lasting popularity.

This generous new selection offers Burns's work as it was first encountered by contemporary readers, presenting the texts in the contexts in which they were originally published.

It reproduces the whole of Poems, chiefly in the Scottish Dialect published at Kilmarnock in 1786, the volume which made Burns famous; and it reunites a generous selection of songs from The Scots Musical Museum and A Select Collection of Scottish Airs with their full scores.

Comprehensivenotes describe the circumstances in which other poems and songs found their way into print, both before and after the poet's death.

The edition also includes some important letters, and a full glossary to explain Scots words.