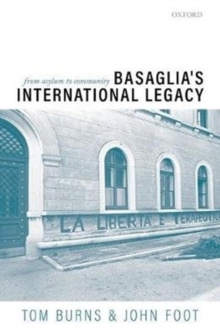 Franco Basaglia (1924-1980) was an Italian psychiatrist and activist who proposed the dismantling of psychiatric hospitals and pioneered new ideas about mental health and its treatment.

Basaglia was also one of the principal proponents of Italy's Law 180, which effectively closed down large mental hospitals in Italy. His ideas and his disciples have had a decisive influence in the move away from institutional care in many parts of the world, particularly incontinental Europe and South America. However, Basaglia is strikingly absent from the literature in Germanic and Anglophone psychiatry. Most of the literature about Basaglia in the last 40 years has been published by his followers and supporters and has often been largely positive, with little explorationof differing responses or possible limitations of his model.

Basaglia's International Legacy: From Asylum to Community provides an overview of current thinking and the international influence of Franco Basaglia.

This resource draws on the combined knowledge of clinicians, policy makers, historians, and social scientists, including a handful of Basaglia's collaborators.

It provides an in-depth understanding and critical analysis of the various applications of his thinking worldwide. Organised into three broad sections, chapters examine Basaglia'swork and influence in Italy; in the 'Basaglian' countries of Europe and South America; and in those countries where his influence has either been rejected or significantly modified.

The Editors bring together the contributions and draw out the important messages (both positive and negative) for currentclinical practice and development within international mental health services.