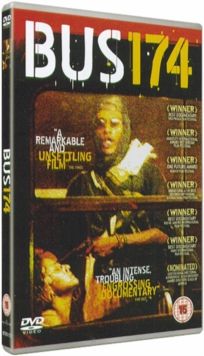 Multi-award winning documentary by Brazilian director José Padilha, exploring the conditions and circumstances that led to an armed siege on a Rio bus in June 2000.

When Sandro do Nascimento, a young homeless man evidently high on drugs, failed in his attempt to rob Ônibus 174 in a wealthy area of Rio de Janeiro, he took the bus passengers hostage armed with a pistol.

The situation escalated as the police, a SWAT team and reporters converged on the bus, and the hijacking unfolded in front of a nation until it reached its tragic and horrific climax.

Padilha looks behind the event at the circumstances of Sandro's life: he had watched his mother's brutal murder as a small boy, and managed to survive the 1993 massacre of homeless children at Candelária.

The documentary shows the desperation of Sandro's plight, using interviews with people involved in the event, including members of Sandro's family, and live television footage to tell this powerful and unsettling story.