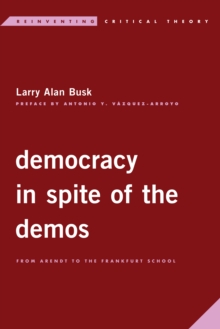 Democracy in spite of the demos : from Arendt to the Frankfurt School

The value of democracy is taken for granted today, even by those interested in criticizing the fundamental structures of society.

Things would be better, the argument goes, if only things were more democratic.

By treating democracy as an end in itself, political theorists of a critical bent overwhelmingly assume that the demos, if given the opportunity, will advance progressive or even radical politics.

But given the recent successes of right-wing populism, and the persistence of pathological views such as climate skepticism, is this assumption still warranted?

If not, then can democracy really save us?