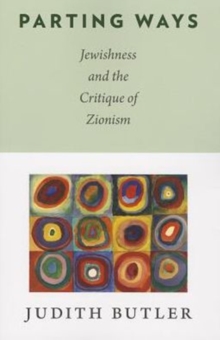 Parting ways : Jewishness and the critique of Zionism

Judith Butler follows Edward Said's late suggestion that through a consideration of Palestinian dispossession in relation to Jewish diasporic traditions a new ethos can be forged for a one-state solution.

Butler engages Jewish philosophical positions to articulate a critique of political Zionism and its practices of illegitimate state violence, nationalism, and state-sponsored racism.

At the same time, she moves beyond communitarian frameworks, including Jewish ones, that fail to arrive at a radical democratic notion of political cohabitation.

In her view, it is as important to dispute Israel's claim to represent the Jewish people as it is to show that a narrowly Jewish framework cannot suffice as a basis for an ultimate critique of Zionism.

She promotes an ethical position in which the obligations of cohabitation do not derive from cultural sameness but from the unchosen character of social plurality. Recovering the arguments of Jewish thinkers who offered criticisms of Zionism or whose work could be used for such a purpose, Butler disputes the specific charge of anti-Semitic self-hatred often leveled against Jewish critiques of Israel.

Her political ethic relies on a vision of cohabitation that thinks anew about binationalism and exposes the limits of a communitarian framework to overcome the colonial legacy of Zionism.

Her own engagements with Edward Said and Mahmoud Darwish form an important point of departure and conclusion for her engagement with some key forms of thought derived in part from Jewish resources, but always in relation to the non-Jew. Butler considers the rights of the dispossessed, the necessity of plural cohabitation, and the dangers of arbitrary state violence, showing how they can be extended to a critique of Zionism, even when that is not their explicit aim.

She revisits and affirms Edward Said's late proposals for a one-state solution within the ethos of binationalism. Butler's startling suggestion: Jewish ethics not only demand a critique of Zionism, but must transcend its exclusive Jewishness in order to realize the ethical and political ideals of living together in radical democracy.