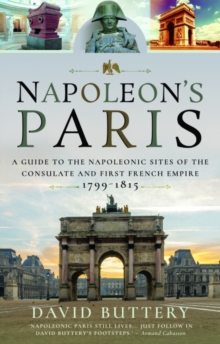 Napoleon's Paris : A Guide to the Napoleonic Sites of the Consulate and First French Empire 1799-1815

Napoleon Bonaparte was one of the most influential rulers in European history.

Renowned as a military commander, he was also a great statesman, administrator, lawmaker and builder - and his civic achievements outlived and arguably eclipsed his victories on the battlefield.

Yet while there are a host of biographies and studies of his military and political career, few books have been written about his connections with Paris, the capital of his empire, where many remarkable buildings and monuments date from his time in power.

That is why David Buttery's highly illustrated guidebook to Napoleon's Paris is such a timely and valuable addition to the literature designed for visitors to the city. Many of the most famous sites in the city were built or enhanced on Napoleon's instructions or are closely associated with him and with the period of the First French Empire - the Arc de Triomphe, the Louvre, the H tel des Invalides, Mus e de l'Arm e, Notre Dame Cathedral, P re-Lachaise Cemetery among them.

David Buttery's guide covers them all in evocative detail.

His work is essential reading for every visitor to Paris who is keen to gain an insight into the influence of Napoleon on the city and the tumultuous period in French history in which he was the dominant figure.