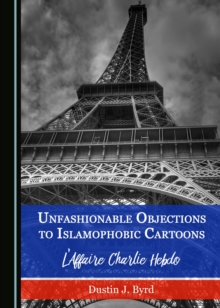 On January 7, 2015, two armed men dressed in masks made their way into the offices of Charlie Hebdo, intent on killing those who had drawn derisive cartoons of Prophet Muhammad.

The satirical magazine based in Paris was well-known for its mockery of politicians, right-wing extremists, racists, and religious figures, including the Pope, Jews, Christians and Muslims.

Once inside, the two gunmen shot and killed twelve employees, including the magazine's editor and cartoonist, Stephane &quoteCharb&quote Charbonnier.

Although Charb often claimed to defend minorities, especially Muslims, against the rising tide of racism in France, all in the name of the French Enlightenment, he nevertheless fell victim to the dialectic of the Enlightenment, in which the Enlightenment itself is functionalized as a tool of repression.

This book critiques the political philosophy of Stephane Charbonnier, showing how the new &quoteEnlightenment Fundamentalism&quote of the political left contributes to the Islamophobic politics of Europe's neo-fascist right.

Drawing on the perspectives of the Frankfurt School for Social Research, it highlights that a true commitment to the Enlightenment ideals requires that the secular left and religious communities enter into a discourse by which they can find common ground.

Without such an engagement, the secular left will increasingly isolate itself from the prophetic, emancipatory and liberational elements within Abrahamic religion, especially Islam.

In doing this, those committed to the Enlightenment abandon a key ally in the struggle against the barbarity of neo-liberalism, nationalism, and neo-fascism, which now threatens to overcome Europe and America.

Thus, the secular Cain must not slay the religious Abel, but rather find a way to live as brothers and allies in an increasingly dark world.