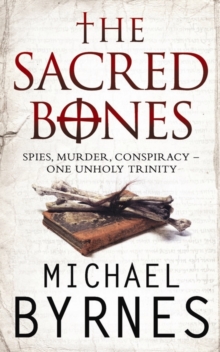 The sacred bones : a novel

At the crossroads of Christian, Islamic, and Jewish faiths, a priceless artifact is stolen from a vault hidden beneath Jerusalem's Temple Mount.

With high stakes on sacred ground, time is running out . . . The violent theft leaves thirteen Israeli soldiers and policemen dead, the Palestinians up in arms over the desecration of sacred grounds, and the tension between the two groups dangerously high.

Jerusalem is a stick of dynamite and the fuse has been lit . . .Meanwhile, in Vatican city, American scientist Charlotte Hennesey and Italian anthropologist Giovanni Bersei have been secretly summoned to analyse a mysterious artefact: the bones of a two-thousand-year-old unidentified, crucified man.

Charlotte starts to wonder - could these be the bones of Jesus Christ?With the malevolent eye of Vatican security expert Salvatore Conte watching her every move, Charlotte must work against the clock.

She knows that if the mortal remains of Christ are indeed in the burial box, there is a question to face: will the Vatican allow this information - and Charlotte - to see the light of day . . . Fast-paced and intelligent, blending historical fact with persuasive fiction, The Sacred Bones is an addictively compelling thriller, perfect for fans of Dan Brown. Following a conspiracy stretching back to the days of the Templar Knights to the shifting alliances of contemporary Middle Eastern politics, The Sacred Bones calls into question many of modern religion's most deeply-held beliefs.