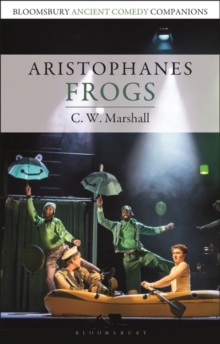 Bloomsbury Academic
1350080942 / 9781350080942
eBook (EPUB)
882.01
12/11/2020
Available
United Kingdom
English
176 pages
Copy: 10%; print: 10%
Description based on CIP data; resource not viewed.
A comedy about tragedy and a play about playmaking, Aristophanes' Frogs (405 BCE) is perhaps the most popular of ancient comedies. This new introduction guides students through the play, its themes and contemporary contexts, and its reception history. Frogs offers sustained engagement with the Athenian literary scene, with the politics of Athens at the end of the Peloponnesian War, and with the religious understanding of the fifth-century city. It presents the earliest direct criticism of theatre and a detailed description of the Underworld, and also dramatizes the place of Mystery cults in the religious life of Athens and shows the political concerns that galvanized the citizens.

This book explores all of these features in a series of short chapters designed to be accessible to a new reader of ancient comedy. It proceeds linearly through the play, addressing a range of issues, but paying particular attention to stagecraft and performance. It also offers a bold new interpretation of the play, suggesting that the action of Frogs was not the first time Euripides and Aeschylus had competed against each other.